The month of October is represented by two birthstones, each with unique properties and beliefs that tend to date back to ancient civilizations. Both of these gemstones are exquisite and beautiful, providing those who were born in October quite a difficult choice when it comes to choosing a particular birthstone to stick to. In fact, many people find the choice between the two particular gemstones that have been dubbed the birthstones of October to be so hard, they rather opt for both of the stones – they may choose to wear a ring fitted with one stone and perhaps a pair of earrings fitted with the other stone.

The two gemstones that have been classified as the birthstones of October includes both the Opal and the Tourmaline. Let’s take a closer look at each of these particular gemstones, and help people make a better choice as to which one they should choose to represent their birth month. 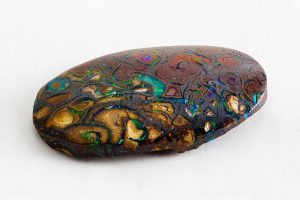 The Opal has been chosen as the primary birthstone to represent those born in October. There are two different kinds of opal gemstones in existence, with the primary color of these gemstones setting them apart. While the one kind of opal has a white primary color, the other rather possesses a black primary color. Still, both of these opal gemstone types offer exquisite beauty for the wearer or the collector. The opal gemstone is often associated with a kaleidoscope as they tend to radiate a large variety of different colors, often said to match all the colors that can be observed in a rainbow.

While the kaleidoscope effect is what makes the opal gemstone quite unique, it is important to note that not all opal gemstones do possess this particular property. Only those considered a precious opal, which refers to an opal gemstone that contains microscopic silica, tend to offer these color reflections. Other types of opal gemstones are simply known as common opals.

There are many different beliefs surrounding the opal gemstone. Arabic legends foretold that opal gemstones were the result of lightning. In Australia, it was once believed that our creator came from a rainbow to the Earth, and blessed the Earth with opal gemstones.

For those born in the month of October and not too keen on the opal gemstone, there is an alternative choice – which is the tourmaline gemstone. The Tourmaline gemstone is the secondary October Birthstone. Tourmaline is available in many different variants since a large number of trace minerals can affect the colors and characteristics possessed by such a gemstone.

The tourmaline is believed to protect the wearer against pollutants and toxins, as well as to drive away negative emotions and thoughts. Additionally, the tourmaline gemstone has also been associated with power.

The opal and tourmaline gemstones have been chosen to represent those individuals who were born in the month of October, both featuring a rich history that extends back to thousands of years. Each of the gemstones has a lot of characteristics about them that makes them perfect for October-born individuals; thus, it may be somewhat difficult for individuals born in this month to make a decision as to which stone they would like to choose – luckily, they do have the option to choose both.