While the carat weight of a diamond is often considered the most important part when starting the process of selecting a diamond to buy, it should be noted that shape also plays a significant role in the diamond’s visible appearance. When a person makes a wise choice regarding the shape of the diamond they are buying, they are often able to opt for a lower carat weight class without losing a significant amount of the diamond’s size – or, at least, the part of the diamond that will be visible to the naked eye. Numerous shapes can be chosen from, ranging from the simpler and more common ones like the brilliant round cut, to more advanced and fancier shapes, such as the Marquise cut.

In this post, we would like to take a closer look at the Marquise diamond cut. The cut is considered to be a fancier diamond shape, and has a long and rich history. Numerous benefits can be obtained when a person decides to opt for the Marquise cut, but, at the same time, certain factors need to be taken into consideration to ensure a person obtains the best value for the money they are about to spend.

Let’s start by looking at where the Marquise cut came from. The cut is, after all, quite unique, and often considered to be part of the fancier diamond shapes. The Marquise cut is certainly not as old as the standard round cut that we often see people wear, but was first developed in the 18th Century. King Louis XV of France made a request to the diamond cutters to obtain a special cut that would resemble the shape of his mistress’s lips. His mistress was known as the Marchoiness Madame de Pompadeour, and was named Jean Antoinette Poisson. 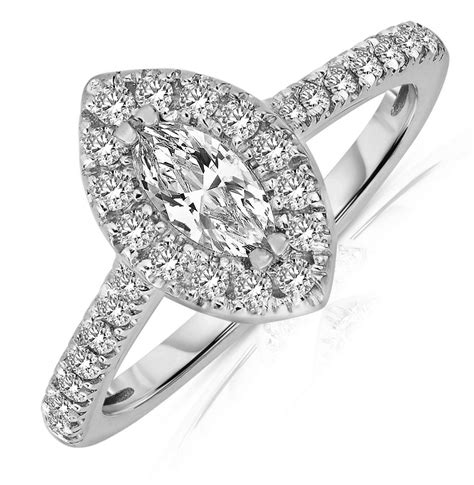 Since the original cut was developed for King Louis XV of France, the shape has been perfected a couple of times and adjusted somewhat in order to deliver a more effective cut to the general population. Still, much of the original features that were observed in the original Marquise cut can still be seen in its version in modern times. The shape of this cut is often said to resemble an American football, but some also claim that it is shaped similar to an elongated eye or a boat.

A total of 56 facets can be observed in the Marquise diamond’s longer shape. This is one of the most significant advantages offered by this diamond, as this causes the diamond to appear larger than many other diamond shapes at an exact same carat weight. For example, a one-carat Marquise cut diamond would seem larger to the naked eye than a one-carat round cut diamond.

The brilliant round diamond cut may be the most popular shape chosen when people buy a diamond, but certainly does not pose as the best cut to all people. The Marquise cut has numerous advantages to offer over simpler cuts, such as the brilliant round diamond shape. Similarly, there are some factors that we would like our readers to take not of when opting for a diamond with this particular cut, as the particular qualities that can be sacrificed with some simpler shapes may cause the Marquise cut to look imperfect.