The Bitcoin network has grown significantly in the past eight to nine years. This digital currency revolution is no longer viewed with doubt, but rather viewed as an opportunity for investors to obtain a considerable return on their investment. For many people, Bitcoin is not only an investment opportunity, but also a way to transact both online and offline. There are many ways to own Bitcoin. You can either choose to buy Bitcoins or become part of the Bitcoin network by mining for coins. The mining process of Bitcoin can be somewhat complicated to a newcomer to the Bitcoin industry, but there are numerous advantages to becoming a Bitcoin miner. There are also different ways a person can mine coins – through custom hardware or by paying a company to rent some of their hardware to mine for them.

With more-and-more miners joining the Bitcoin revolution, people are becoming to get concerned about the fact that Bitcoin has a limit to how many coins can be mined. There are only a certain amount of Bitcoins that can be mined ever, and when this limit is reached, people are concerned that the cryptocurrency will become obsolete and not be able to provide them with any reason to continue mining. Let’s take a closer look at how many Bitcoins are left at the moment, and when the blockchain is expected to run out of coins.

When Will Bitcoins Be Depleted?

The entire Bitcoin blockchain has the ability to distribute a maximum of 21 million Bitcoins. To date, however, approximately 4.3 million Bitcoins have been claimed by individuals throughout the entire world, primarily through mining. This means that there are now approximately 16.7 million of these coins available in the Bitcoin blockchain that has yet to be claimed by miners. Unfortunately, however, not all of these coins will be successfully claimed by miners. Approximately 30% of the coins available in the Bitcoin blockchain will not be successfully mined by miners, but rather be lost due to private keys being misplaced, hard drives crashing and other potential problems that may cause these Bitcoins to be lost. 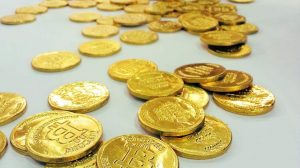 When Bitcoin was only launched, a total of 50 Bitcoins was rewarded for each block that was mined in the Bitcoin blockchain. For every 210,000 blocks mined, however, the block reward is divided by two in the Blockchain. At the moment, the blockchain reward stands at 12.5 Bitcoins rewarded for each block successfully mined. Every four years usually marks a timestamp for the blockchain reward to be divided by two, as this is approximately how long it takes for 210,000 blocks to be mined.

A total of 64 halves are expected to take place before no Bitcoins will be available in the blockchain anymore. When you make your appropriate calculations, you will notice that there are still A LOT of years to go by before we are to reach this period in time. It is currently estimated that the Bitcoin blockchain will run out of Bitcoins by approximately 2140.

How Many Bitcoins are Left – Conclusion

While Bitcoin is becoming more popular and an increasing number of individuals are interesting in becoming part of this digital currency, a lot of individuals are concerned about the fact that Bitcoins can be depleted at some point in time. Fortunately, by considering the current rate at which miners are solving blocks within the Bitcoin blockchain, there is still a significant amount of time that has to pass before these coins will be depleted. For this reason, people have no reason to be worried just yet.

For more on the cryptocurrency market, check out CoinDigital.com.